There is not a single-type of independent school. The ISC represents almost 1,400 schools with real diversity of provision. ISC schools vary significantly in size from having fewer than 50 pupils to over 2,500, although half of all schools have fewer than 300 pupils. Almost half of schools are non-selective and 75% are not for-profit. 18% of pupils at ISC schools have SEND.

Particularly in STEM subjects that are crucial to future productivity; and languages post-Brexit.

Recent reforms of GCSEs and A-levels were based on qualifications taken at independent schools including IGCSEs and the Pre-U, and many of the structures and traditions of the independent sector have been adopted by state schools to improve pupils’ education.

Independent schools save the state sector £3.5bn per year through parents (who pay taxes to support state education) not taking up state school places.

The sector contributes £1 billion annually to education exports, is respected across the world and is attractive to overseas companies re-locating families to the UK. The Government’s International education strategy wants to increase number of overseas students – ISC schools attract over 56,000 non-British pupils and are a pipeline to higher education for international pupils.

85% of ISC member schools already have partnerships with their state counterparts – equating to more than 11,500 partnership projects including supporting pupils with university applications, careers advice and providing teaching in shortage subjects such as Modern Foreign Languages.

The value of independent schools

The value of independent schools

Julie Robinson, chief executive of the ISC, highlights the educational and economic value of independent schools. 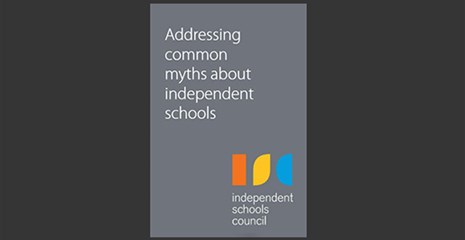 It's time to bust some myths and common misconceptions.

The ISC and the associations it represents fully support efforts to tackle racism or any other type of discrimination – there is need for positive, meaningful change.

Nearly all ISC independent schools in England are inspected by the Independent Schools Inspectorate.

ISC is gathering information about successful partnerships and providing details of what works best.

ISC Digital was set up in 2007 by the Independent Schools Council. The group is composed of experts with representatives drawn from the various Independent School Council member associations and provides independent advice to Senior Management teams on a range of ICT related issues, primarily through the publication of briefing papers and the annual conference.

Safeguarding guidance and resources for schools.

Guidance for undergraduates or graduates considering teaching as a career.