A quarter of all A level entries for French, German and Spanish come from within the independent schools sector, new figures reveal.

In 2015, just 10,328 pupils studied French at A level across the UK, with 2,572 (24.9%) from independent schools. Both Spanish and German also showed low entry numbers, with independent school pupils providing 25% in both.

And as well as modern foreign languages, other strategically important but vulnerable (SIV) subjects such as maths, science, classics, economics and music show disproportionate numbers of independent pupils choosing them.

Nationally, just 14% of all A level students are educated in independent schools, but 2015 A level figures from the Joint Council for Qualifications (JCQ) reveal higher percentages studying these subjects.

Achievement in the subjects is also very positive in the independent sector with an average A* or A grade percentage across the SIV subjects of over 50%. 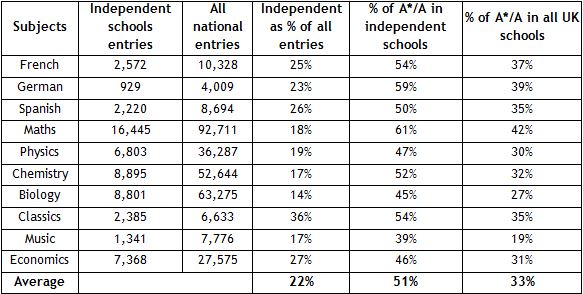 At GCSE, where 5% of all students are independently educated, more than 60% of all entries for classics are from independent schools although the percentages across the SIV subjects is lower than at A level. Attainment at GCSE is also high. 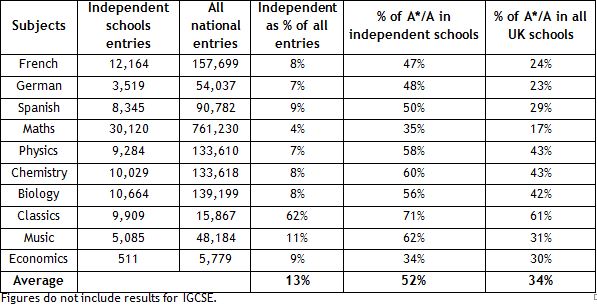 Barnaby Lenon, Chairman of Independent Schools Council, said: "The annual JCQ data shows yet again that independent schools punch well above their weight when it comes to achievement and uptake of some of the most important subjects.

"The large number of pupils taking sciences and modern languages and their high grades explains why they gain places in these subjects at top universities. In fact in some cases they are propping up university departments. According to UCAS, of 18-19 year olds going to university in 2014 who live in the UK, 27% of those studying medicine came from independent schools as did 28% of those studying European languages.

"Why does this happen? In part it is because many independent senior schools still ask for modern languages as part of their admissions criteria. So this drives prep schools to teach these subjects and teach them well. Partly it is because our senior schools often have strong teachers in tricky subjects like physics and Latin; they are successfully taught, so pupils opt for them. In the case of modern languages the explanation is that many independent schools require all pupils to take at least one modern languages GCSE.

"Another telling reason is that independent schools are more likely to have teachers with a degree in the subject they teach, not least the sciences. Having subject specialists in the classroom, including for young pupils in prep schools, is a huge advantage."