Susannah Baker, development director at Magdalen College School, Oxford, explains how the school has provided laptops and internet access for pupils from three local primary schools, in a bid to tackle digital poverty exacerbated by the pandemic.

For most pupils, the New Year has marked the closure of schools and a return to remote learning. Though teachers do all they can to maintain the continuity of education during the pandemic, many pupils face barriers to learning in the form of digital poverty.

In November, we became aware that government schemes were unable to provide enough devices to address the needs of pupils without access to technology. Heads at three primary schools in East Oxford – where MCS has close links – described how families did not have access to a computer at home and, in one case, how just four pupils in a year group could participate in online learning when they were forced to self-isolate.

No one wins when children miss out on their education, and I knew that our parents and alumni would share my family’s wish to help. With donations from all areas of our school community, we have been able to raise money for over 50 laptops – providing vital support to pupils learning from home. The machines arrived in December, just in time to equip pupils ahead of the latest national lockdown, announced on 4 January 2021.

Bill Morris, a former MCS pupil who supported the initiative, said: “I spent my boyhood in East Oxford and passing the 11+ transformed my life. When I heard how much difference having a laptop could make for this generation, I was glad to help.”

Bayards Hill Primary School was one of the schools to benefit, receiving 18 laptops for pupils in need. Maurice East, chair of the governors, explains why the equipment was so essential: “Not all our children have access to a personal computing device and, even if they do, it is often shared with a number of siblings. For some of our pupils their only access to the internet is via the mobile data package on their parent’s or carers phones. When this runs out, they can find themselves excluded from online learning.”

St Francis CE Primary School in East Oxford also received a number of laptops for their affected pupils. A representative said: “Having access to technology to be able to work from home if required will make such a difference to our children's home learning experience, and we are therefore hugely grateful to Magdalen College School for this wonderfully kind gesture.”

Just before Christmas, we were able to visit St Francis CE Primary School. There, we met Year 6 pupils Navda and Logan, who each received a laptop. They expressed their gratitude for the support, and made a card to say thank you. Fleur Belcher, their headteacher, described the donation as “transformational”, given that 30 per cent of their pupils live in poverty.

The campaign forms just one part of our wider partnership activity, which consists of a range of initiatives designed to support our local communities. Throughout the pandemic, MCS has produced and donated PPE to Oxford University Hospitals and local GP surgeries, and continues to run Rose Hill Community Larder, an initiative that has proved a lifeline to local residents during these challenging times. 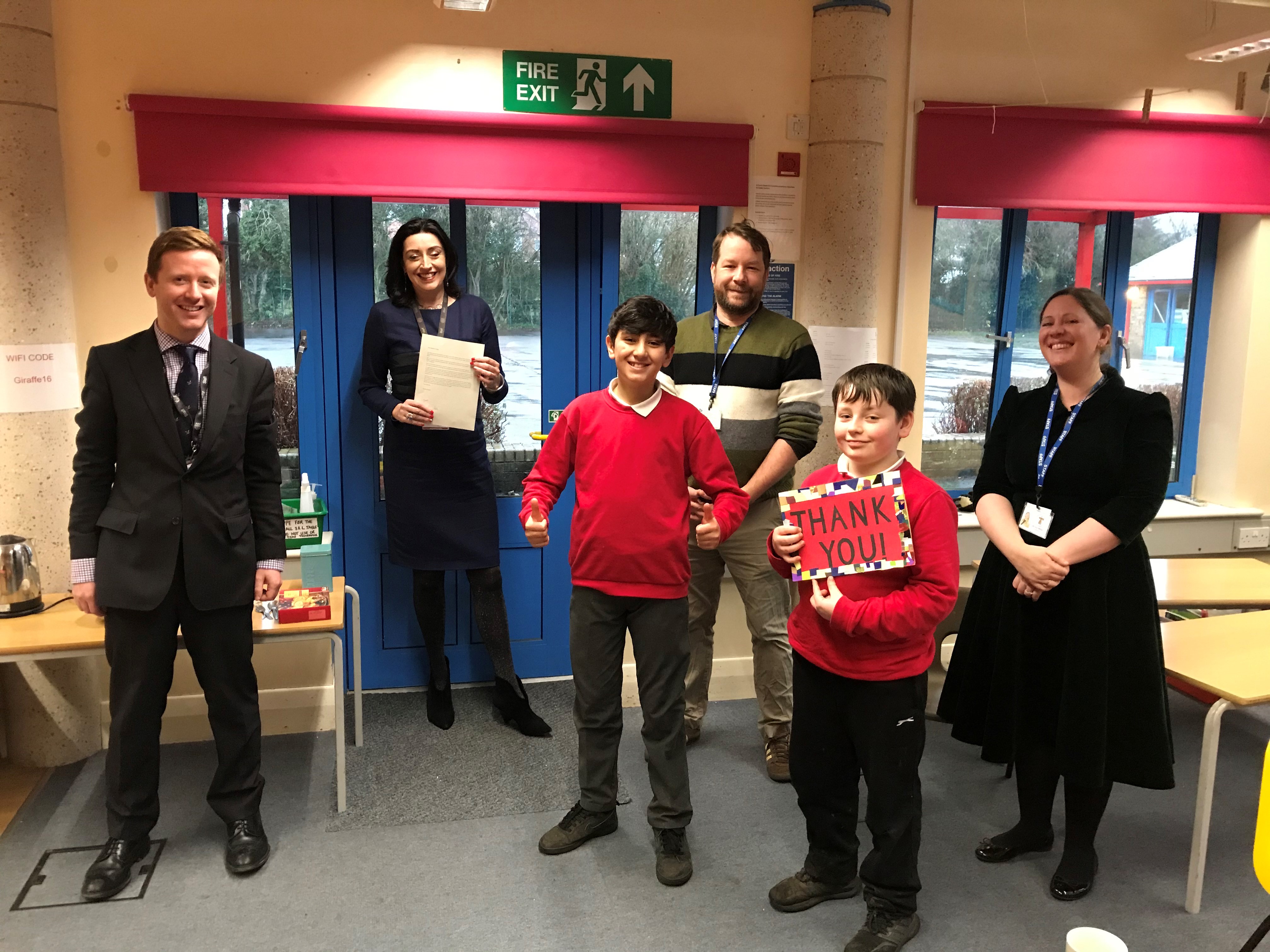